The Commanding Officer of the 272 Special Task Force Task Battalion, Lt. Col. Muhammad Abu-Ali and six troops who were killed during a Boko Haram attack at Mallam Fatori on November 4, 2016 were given a national burial at the military cemetery, Abuja on Monday.

The Army Commander described by the Chief of Army Staff, Lt. Gen. Tukur Buratai, as ‘Sarkin Yakin, the frontline general’ and the six others were buried in a brief but solemn ceremony which was attended by the leadership of the nation’s military, top politicians, family members of the deceased and associates.

It took the Chief of Army Staff a lot of efforts and  a visible struggle with emotions amidst tears, with cracking voice, to read the brief funeral oration of the fallen warriors.

Buratai, while reading the funeral oration of the deceased amidst intermittent sob, said that they were “inducted into the Operation Lafiya Dole in 2014 to form the pivot of counter insurgency efforts of the Armed Forces of Nigeria in the North-East.”

He said that the soldiers, who were members of the 119 Task Force Battalion and the Armed Forces Special Forces, took the battle to the insurgents and recovered several territories from them.

According to him, “The brave, precise, professional and inspiring” troops recovered

“In these battles, they rescued women, and children, fathers and mothers, the young and the old and restore peace and order to Nigerian citizens.

“At last on November 4, 2016, they paid the supreme sacrifice in the battle of Mallam Fatori. These men epitomise the best of our military. They exemplified the values of our nation and our military, with their loyalty, discipline, courage selfless service, respect, honour and dignity.

“They left behind wives, children, as well as parents and dependants. They fought for the unity of our nation; our brave and gallant compatriots, your families and comrades will miss you. The entire nation will miss you but be rest assured that your labour will never be in vain.

“Your loved ones will remain in our care and their welfare will be of utmost priority at all times. You have fought a good cause and we are rest assured that your souls rest in perfect peace with almighty in Paradise.”

Also, President Muhammadu Buhari said that the officer and the soldiers were “fearless, responsive, inspiring selfless and dedicated” to the discharge of their duties and paid the supreme price for Nigerians to enjoy total freedom.

The President, who was represented at the burial by his Chief of Staff, Abba Kyari, said that the gallantry and the dedication displayed by the deceased soldiers and their colleagues contributed to the restoration of peace and normalcy in the North-East.

The President said that the death of the soldiers would not be in vain as their exemplary display of patriotism and professionalism would further spur the government to intensify measures to defeat the insurgency in the country. 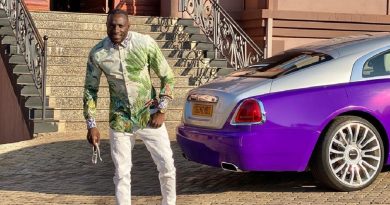 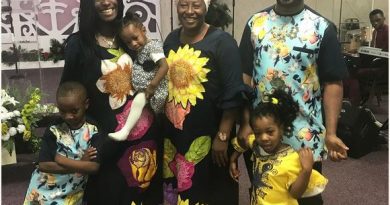 See Patience Ozokwor With Her Daughter, Son in Law & Grandchildren 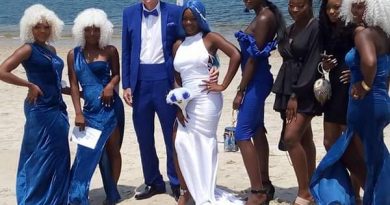