President Muhammadu Buhari on Tuesday blamed the harsh economic situation currently faced by Nigerians on the mistakes the country made in the past.

Buhari noted that though the country was blessed with numerous resources, it allowed herself to be confined to a mono economy by paying too much attention on petroleum to the detriment of viable cash crops like cocoa, groundnut, palm oil, palm kernel and hides and skin.

The President spoke shortly after inaugurating the Edo University, Iyamho in the Etsako West Local Government Area of Edo State as part of his two-day official visit to the state.

He also took a tour of the facilities, including the administrative complex and the Faculty of Science building of the institution, which are named after him.

He was accompanied by Governor Adams Oshiomhole; his Lagos State counterpart, Mr. Akinwumi Ambode; the National Chairman of the All Progressives Congress, Chief John Odigie-Oyegun; the Governor-elect, Edo State, Godwin Obaseki; and officials of the Federal Government.

Buhari said, “We are blessed with human and material resources. We have made terrible mistakes in allowing ourselves to be cornered into a mono economy and we are now paying dearly for our mistakes.

“Nigeria saved the money from cocoa, palm oil, palm kernel, groundnut, hides and skin and even started the professional development of petroleum.

“Once petroleum was discovered and developed in quantity, we threw everything to the dogs. Now, petroleum is diving from an average of $100 per barrel in the last 12 years to between $40 and $50 and we are paying for it.

“What have we done to our infrastructure – power, rail, road and social infrastructure, education and health? Just check and find out. We became very wasteful.”

The President, however, stressed the need for all Nigerians to work together towards reviving the solid minerals sector, reiterating his administration’s commitment to providing security, improving the economy and fighting corruption to ensure a better future for the country.

He said, “Now, we have to go back to the land, to solid minerals, and do a lot of savings so that we can leave a better country for our children and our grandchildren.

“For those of us who are here and that have constituencies, please continue to persuade your colleagues to bear with the leadership of this country at all levels because this is a time of hard work. This is a time of rebuilding Nigeria.

“We are pleased that people understand gradually what we are here for and what we stand for. We emphasise three things – security, economy and fighting corruption.

“There was no infrastructure, and that coupled with hunger, I think it’s a big recipe for disaster. We thank God for saving us from that disaster.”

He also congratulated Oshiomhole for his foresight in contributing, not only to the development of quality infrastructure in Edo, but also to promoting national development.

Oshiomhole explained that the idea of the new university followed the state government’s desire to establish an institution which had its own life and was capable of competing favourably with its foreign counterparts.

He noted that while previous administrations had indirectly privatised primary and secondary education, when it failed to build standard schools, his administration believed in finishing well.

Oshiomhole said in order to accommodate the poor among the students, the management of the new university had provided grants to subsidise fees in the institution.

The governor stated, “We give grants to those who need it and economy fee for those who can afford it.”

“We decided to move away from the tradition, where the government subsidises education for the rich just as much as we subsidise for the children of the poor. We will not pay subsidy for children of the rich.

The governor described the President’s visit as a “generous honour” on him, especially ahead of his handover to his successor on Friday.

Buhari remains indoors after his return,tasks before him as he resumes work on Monday

Why Tinubu’s Billions Can’t Help Him To Be President In 2023, Ex ASUU President Achuzie 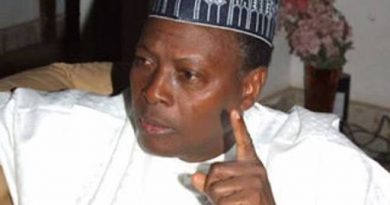