The newly elected President of the United States of America, Donald Trump, has things in common with President Muhammadu Buhari. In fact, the US elections produced several interesting parallels between Nigeria and America; one is the divisiveness occasioned by some of the most virulent rhetoric ever traded during a campaign. In the age of social media, it is uncertain the practice of democracy will ever retain any display of civility. In Nigeria last year and in the US this year, I witnessed much bad blood pumped by people who would have to reformat their relationships after the elections. It is interesting how Americans, like Nigerians, also voted “change.” Both also clamoured for an anti-establishment candidate.

Recently, Buhari admitted that after he had been elected, and he saw the depth of rot in Nigeria’s government, he felt like running away. I believe after the initial euphoria of winning, and Trump settles down to work, he will have his own “Buhari Moment” even though he may not be tactless enough to admit it publicly. Buhari’s confession, incidentally, did not elicit much shock from the nation; I guess it was because we are used to his jeremiad. Such admissions only reiterate what we have known by now: he was never quite prepared for the Presidency, he only wanted to be President.

Buhari, shortly after he won the election, panicked and started saying he had no magic wand to correct Nigeria’s problems. To think that only weeks earlier, he had been campaigning like he had one. He became President only to find he had a real job, one he could not do by standing on the sidelines and griping about “corruption” all day. Sometime after, he also claimed he would have been a much better performer if he had age on his side. Trump is another unprepared president who made it this far largely because he had a celebrity reputation that preceded both him or his abilities. I do not think when he declared his interest to run he imagined he would actually win but along the line he successfully keyed into racist, sexist, nativist, and extreme rightist sentiment pervading a section of American demographics. His demagoguery and bigotry might be shocking to folks who expect better of America but it resonated with Americans who fear a white genocide: That liberal ideologies that permit immigrants, terrorism and refugees threaten whiteness.

Trump that has no serious idea how a nation works in the 21st century garnered attention because he ramped up denigrating rhetoric. There are, of course, Americans who genuinely believed in Trump and (naively, I think) assume if he would run the nation like his businesses (at least the ones that succeeded), America may emerge “great” again. There are others who wanted an outsider, someone who does not typify the rot and corruption of Washington. It remains to be seen how that works out for the US; at least it has not worked for Nigeria. Trump will soon realise it takes more than personal charisma, “body language,” braggadocio, and ranting about the incumbent to run a complex society.

I look back at the 2015 elections and still marvel how Buhari’s handlers shielded him from the cerebral aspect of the contest. He shunned debates and his supporters were too enamoured with his mystique to press him for an agenda. He went all over the country with an unrealistic manifesto. The few times he granted an interview, we were alarmed at his moldiness. When he said he would stabilise the oil market and make naira equal to a dollar, it was obvious he was an economic virgin. On the campaign trail, Trump has made equally laughable comments about the economy. During the three debates he had with his opponent, Hillary Clinton, he was out of his depth on any issue and only managed to bluster through.

Some of Trump’s brightest economic ideas have been about protectionism, most of which does not take into account the reality of how trade policies have actually benefited the US. If he tries to execute some of the ideas he has been flaunting for months, he would be shocked how it would backfire. Some of the arguments made for Buhari was also made for Trump – that he would employ hands far more capable than him to help steer the country. From afar, it seems like a feasible idea but a leader with only an elementary knowledge of governance will find himself reeling at the complexity of his job and soon begin to falter. Buhari took almost a year to form a cabinet and when he eventually did, nobody was wowed. Trump, a narcissist, may even be less rigorous and instead build the government around himself just like he did his campaigns.

The fear of what Trump portends, however, is much more than whether he will tank the US economy or not. Trump also happens to be one of the most divisive human beings to run an election in contemporary times. Because he receives support from white nationalists such as the Ku Klux Klan, they will now be emboldened to crawl out of the woodwork and declare an open season of racism. For Muslims, ethnic and racial minorities, women, and the disabled, and all the groups that have been a target for white supremacist vitriol under President Barack Obama, the next four years will be a fight to retain their dignity in Trump’s America. Trump already described himself as the “law and order” candidate and anyone who knows the history of America understands what kind of dog whistle that is. These are interesting times.

We can argue that America has strong democratic institutions but no matter how entrenched the habits of democracy, no system can survive abuses by despots and dictators. Trump boasted that if he won he would tweak current libel laws against the media. A presidential candidate threatening what is tantamount to Decree 4 is almost unthinkable. When a leader says he will toy with mechanisms of checks and balances, and still gets a majority backing, it is only a matter of time before they begin to weaken their supposedly strong institutions. Also, for a man whose “make America great again” slogan was premised on nostalgia of a time when minorities were excluded from national patrimony, I am anxious about acts of violence and oppression this newly empowered majority will wreak on minorities; and which the majority will condone as part of the project of “making America great again”. Under Adolf  Hitler’s Germany, that was part of how evil became banal.

For Trump who acts unhinged, and lacks self-control, it also remains to be seen how America will use its instruments of democracy to reel him in. The European philosopher, Slavoj Zizek, said it was better Trump won because it would implode the system and from there something new might emerge. Zizek is a thinker I respect but such Dadaist approach to political philosophy ignores that there are material consequences to democratic choices. Like I told some of my American friends who found the idea of Trump as an anti-establishment revolt tempting, change is not always useful. Nigerians faced a similar dilemma last year and we allowed ourselves to be seduced by the idea that we were voting a man who would pull down the corrupt establishment. Just look at how it has worked for us so far.

Meanwhile, I congratulate Clinton for her valiant efforts. With Trump’s emergence both the Democratic and Republican parties will rethink their disconnect from voters. Clinton worked hard for the presidency and for a country that prides itself on meritocracy, she ought to have won. Anyway, it was not meant to be but I am proud of her for putting up a brave fight. 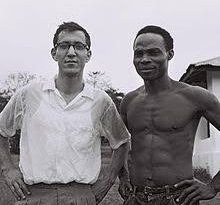 From The Archives: May Your Road Be Rough, Tai Solarin