A Togolese, Segun  Sunday, has been apprehended by policemen attached to the Lagos State Special Task Force (Enforcement) Unit, in connection with land grabbing in Oko-Olomi, in the Ibeju-Lekki area of the state.

Three other suspects – Ben Micheal, 31; Segun Muda, 58; and 20-year-old Toheeb Ololade – were apprehended with the Togolese.

Micheal hails from Owo town in Ondo State, while Oladele is from Oje town in Oyo State. Muda, the ringleader, who was said to be a baale in a community in Ibeju-Lekki, is an indigene of the Epe area of Lagos State.

Two locally-made guns were reportedly recovered from the suspects, who were arrested in a raid on Wednesday.

The baale had reportedly owned up to the crime and sought clemency.

PUNCH Metro learnt that the arrest followed a petition addressed to the Lagos State Committee on Land Grabbing by residents of the affected community.

The dwellers had complained about the unlawful invasion of their property to the committee, asking the government to come against the hoodlums.

The petition was said to have been sent to the Lagos State Police Commissioner of Police, Fatai Owoseni, who directed same to the task force Chairman, SP Olayinka Egbeyemi.

The Head, Public Affairs Unit of the agency, Mr. Taofiq Adebayo, confirmed the suspects’ arrest, saying the CP had directed that they should be transferred to the State Criminal Investigation and Intelligence Department, Yaba.

He said, “The Lagos State Government arrested four notorious land grabbers and recovered two locally-made guns and other weapons. The government’s action was sequel to a petition submitted to the Lagos State Committee on Land Grabbing by the people of Oko-Olomi Golf Course area of Ibeju-Lekki.

“The Commissioner of Police, after being briefed about the arrested land grabbers, directed that they all be transferred to the SCIID, Yaba, Lagos, for further interrogation. Muda refused to say anything other than appealing to the government, while others claimed they were many in the business. 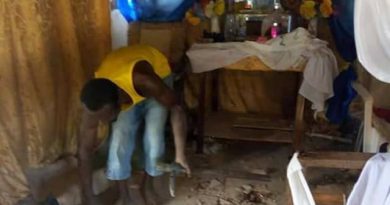 Job Seeking Nigerian Lady, Iniobong Umoren Raped & Killed By Serial Killer. Police Releases Why Her Body Has Not Be Released To Her Family (pics & video) 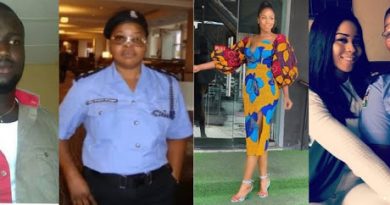