The Yoruba movie industry has recorded its first death of 2017 as one of its own, Toyin Majekodunmi, died on Monday.

The cause of her death is not yet officially announced.

Married to a fellow actor, Solomon Majekodunmi aka ‘Baba Kekere’, the news of her death was shared by actress and movie producer, Bimbo Success.

The late Mrs. Majekodunmi featured in numerous Yoruba movies and often starred alongside her husband.

Prior to launching her movie career, she worked with the Lagos State Ministry of Information for many years.

Her husband also worked in the international banking division at First Bank Plc.

A delight on stage and in movies, the late actress was married for 37 years and was blessed with three children – two daughters and a son.

Her colleagues and fans alike have taken to social media to eulogise the late movie star.

Mark Zuckerberg shares pictures of his jogging routine in 2016 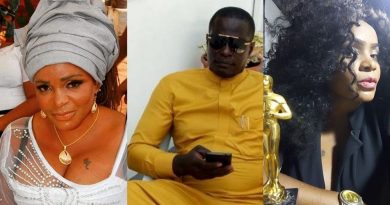 My Mother Was Physically Abused By My Father, I can’t Stand An Abusive Relationship, Cossy Orjiakor (pics)

“I Am Very Proud To Be Gay & I Am Living Well With HIV”, Nigerian-UK Pastor Reveals (pics)