The incident took place on July 5 along Center for Management Development (CMD) Road in Ikosi-Isheri Local Council Development Area (LCDA) of the State.

Recall that Ambode a few days ago suspended Ogundare moments after he was paraded alongside his brother, Mohammed Adams by the Lagos State Police Command for conspiring to fake the alleged kidnap.

In a press release signed by the State’s Commissioner for Local Government and Chieftaincy Affairs, Hon Muslim Folami, the Governor ordered Ogundare to henceforth desist from parading himself as the Baale of Shangisha or discharge any duties attached to chieftaincy matters in the State.

Folami, in the statement made available to DAILY POST said: “This is to inform the general public that His Excellency, Governor Akinwunmi Ambode has authorized the DEPOSITION AND PROSECUTION by police of Chief Yusuf Mutiu Ogundare, Baale of Shangisha with immediate effect.

“This is in accordance with Section 38, subsection 1 of the Obas and Chiefs Laws of Lagos State inter-alia “The Governor may suspend or depose any Oba or Chief whether appointed before or after commencement of this law, if he is satisfied that such suspension or deposition is required according to customary law or is necessary in the interest of peace or good government.”

“Furthermore, he (Ogundare) is to stop parading himself, purports to exercise or discharge any of the duties attached to Chieftaincy Matters with immediate effect.”

Folami said the deposition followed the formal confession of the Baale to security services that he staged his own kidnap to blackmail the State Government.

State Commissioner of Police, Mr Fatai Owoseni, while parading the suspects at the Lagos House in Ikeja, had narrated how they conspired to perfect the fake kidnap, all in a bid to implicate the Oba of Magodo, as well as rubbish the State Government and security agencies.

Owoseni said six days after the incidence, some men of the Rapid Response Squad (RRS) on patrol in Alausa area at about 10pm apprehended Ogundare after he was dropped in a suspicious manner by a car which sped off immediately. 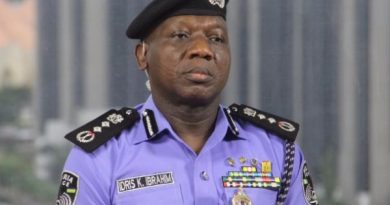