We have heard many giving their lives to Jesus Christ in different ways.

Some got their salvation one way or the other. Some faithfuls got converted by friends and relatives. Some heard the gospel through the media outlets. But the story of how Kemi Olunloyo got converted is synonymous to the biblical Paul in the New Testament. Her professed conversion is controversial as the woman is controversial in many ways.

Kemi and her father 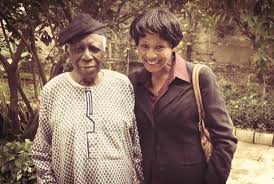 Kemi Olunloyo is the daughter of a former Governor of old Oyo state. A well known controversial blogger that has been a thorn on the flesh to many Nigerians. A well travelled woman, she’s bold assertive, intelligent and tenacious to any Personalty that catches her fancy,.
She has written many damning secret stories about very important personalities like Former President Obasanjo, celebrated cinematographer Tunde Kelani. Many celebrities both in the music and film industry have been victims of her constant attack and direct encroachment to their private lives. Jide Kosoko, Angela Okorie, Seyi Law and also her family members were not spared.
He once called Jide Kosoko, a popular Nigerian actor, ‘a black widower’, as he had unfortunately lost three wives in a row.
He picked on Seyi Law’s infant daughter calling her demeaning names.
Clergymen like Pastor T B Joshua, Bishop Oyedepo, Pastor Adeboye were not left out.
Her father, Dr Victor Omololu Olunloyo ( a cerebral man and a septuagenarian) has apologized to many of her daughter’s victims. He revealed that Kemi had ‘erratic’ behavior and she was dealing with mental illness. He said ‘ Her erratic behavior had put her in trouble in Ireland and in the United States, and the late Ooni of Ife, Okunade Sijuwade, once bailed her out of jail.

General Overseer of the Redeemed Christian Church of God consistently received public bashing from this controversial blogger. She once called him a ‘lunatic Christian fundamentalist’, and a ‘dumbass’. 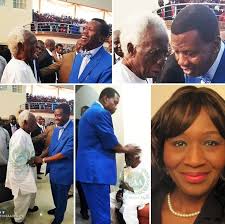 At a point, the relentless attacks on the RCCG GO resulted in an open apology from her father. He sought audience with Pastor Adeboye when he had a crusade in Ibadan, where her father lives.
The ex governor publicly apologized and asked Pastor Adeboye to pray for him which he gladly did. At a point, the father got tired of her behaviors and allegedly disowned her.

Despite all pleas and entreaties she continued with her insidious and virulent attacks on many important personalities .
Unfortunately, she got more than what she bargained for when she picked on Pastor David Ibiyeomie, a Rivers state based clergyman.
Ibiyeomie is the founder of Salvation Ministries based in Port harcourt, capital city of Rivers state. She accused the man of infidelity, gross financial misconduct and adultery. She accused him of having illicit affair with Iyabo Ojo, a popular Yoruba actress. Kemi claimed she acted on the letter written by a member of the church.
The Pastor called her to retract the story, saying she defamed him by the unsubstantiated story. Kemi Olunloyo bluntly refused.
The Pastor in a written petition lodged complaint with the Rivers state police. Acting on the pastor’s request, Nigerian police in Ibadan arrested her on 13th of March, 2017, under the Cybercrime Act and Criminal Code Act and was driven to Port harcourt to face her charges
Also, one Mr Samuel Walson, a Port Harcourt publisher that syndicated her story was promptly arrested. She was detained in prison till March 23rd , but the case was stalled due to inability of the magistrate to sit.

On March 30, 2017, pictures of Kemi Olunloyo in prison uniform and in handcuffs alongside Samuel Walson surfaced in the press. When the court eventually sat, Chief Magistrate, Alatuwo Elkanah Fubara, in his ruling granted the two accused bail in the sum of two hundred thousand naira (N200,000) with credible sureties that reside in Port Harcourt. The hearing was adjourned to May 4th, 2017

This is the beginning of her ordeals

in prison. Nigerian’s grinding and slow judicial process can make a sane man/ woman loses his/ her sanity.
She spent many months in prison due to her inability to perfect her bail conditions. Everybody dropped her matter like a hot potato and was abandoned in prison. Many of her victims heaved a sigh of relief when they heard about her incarceration. Her family members avoided her too, because they were tired of her malfeasance and demeanor.

Though many Nigerians called for her release in the media but little could be achieved. After spending almost three months in detention, she perfected her bail condition. Her freedom from detention was short lived since she was immediately arrested to face another charge at the Federal High court, to answer defamatory charges, a case instituted by Iyabo Ojo.
So she was facing a one count charge of publication of defamatory charges and false publishing at both courts.
The case of cybercrime was dropped for the court’s lack of jurisdiction. Mr Walson was left off the hook, our dear blogger was left alone to fight for her freedom.
Double jeopardy for our controversial blogger!

The legal rigmarole continued, and on the long run, she spent better part of last year (2017) in and out of courts and prison.
Even the hardened will succumb, our dear lady must have gone on soul searching journey of how she got herself in this mess. Many got their redemption through harrowing prison experiences, so Kemi Olunloyo’s case was not different.
I was not surprised when early this year, a story circulating in the media that Kemi Olunloyo said she’s a born again Christian. Guess where she gave her life?

At Pastor David Ibiyeomie’s Salvation’s Ministry in Port harcourt. She was seen in pictures, in tears hugging the wife of David Ibiyeomie.
She was seen apologizing to the man and she said ‘ I have given my life to Christ through Pastor Ibiyeomie, someone used me to genuinely destroy a real man of God’.
We are watching her if truly she has desisted from her old ways, or she was looking for a soft landing to buy her freedom and quash all court cases against.
Time will tell.

The MD Of HITV Shares His Touching Experience

Dear Senator Tinubu, Buhari Has Trashed Us All!