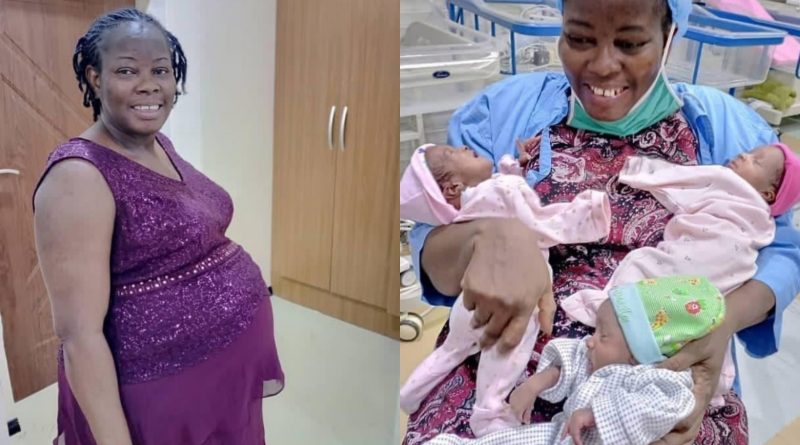 I shed tears of joy when our babies came ­—husband

Mrs Helen Ogeah couldn’t control her joy when our correspondent met her.

Helen and Emmanuel Ogeah married on April 5, 2010, at the All Saints Anglican Church, Kebu, Asaba, Delta State. She was already pregnant and had expected that in a few months time from then, she would carry their child or children. But things didn’t turn out as planned because she lost the pregnancy at four months.

She said, “I got married on April 5, 2010 at the All Saints Anglican Church, Kebu, Asaba, Delta State. We were joined by Reverend Canon Chukwudi Ekpemuka and Reverend Umeh. I was expecting to have a baby after nine months. But I lost the baby at four months.’’

After losing the pregnancy, she said it became difficult to get pregnant again. She kept trying for a while with no positive result. But after a few months, her prayers were answered. But the joy was also short-lived. She told Sunday PUNCH that she lost the pregnancy again and the miscarriage battle continued for 11 years alongside other complications.

She stated, “After I lost the first pregnancy, I didn’t get pregnant immediately but after a few months, I got pregnant again but my joy was short-lived when I lost the pregnancy too. The miscarriages continued and the worst was when I lost one at six months. The embryos were either evacuated or was removed through the normal delivery process.

“It was a difficult time for me, physically, emotionally and mentally. The trauma of losing pregnancies, going into the labour room to give birth to a dead child and the ordeal of people asking me what happened after the protruded belly went down were really painful.”

Narrating further, Helen said the last pregnancy she had was an ectopic pregnancy, adding that she visited many hospitals for medical help which included the Federal Medical Centre, Asaba, a private hospital owned by Catholic known as Saint Joseph, Temple Clinic, Saint Rebecca Hospital and Life Care Hospital among others.

She stated, “The news was obviously a bad one. I was distraught. I didn’t just lose the child but I also lost a fallopian tube and my womb was weak. In fact, the doctor told me that I could never carry a child again and that it was better for me to adopt a child. I got home feeling dejected and broke the news to my husband. I thank my husband for his encouragement. He always told me not to worry that God’s report was different from that of man.’’

Helen said she tried not to see the issue as a spiritual battle as her husband repeatedly assured her that with technology, they could have their own children.

According to her, her sadness ended when God led her to an Abuja-based doctor who God used to end their years of childlessness.

Helen added, “After a friend recommended a hospital in Abuja to me, I went there with her after discussing with my husband.  The doctor in charge told me that I had no problem and all I needed to do was to undergo surgery. I underwent surgery in March 2020 and returned home two days before the COVID-19 lockdown.

“After the surgery, he told me to rest for some weeks. Thankfully, I missed my period in August. Two weeks after confirmation that I was pregnant, I started bleeding again. I thought I would lose the pregnancy. I then went for an ultrasound scan. The scan showed three sacs indicating three babies. I was saddened by the development. I asked the doctor that I had been unable to carry a baby to term, how would I carry three?

“He assured me that I would succeed. I was admitted at the hospital from the first month till I was delivered of the three babies through caesarean section in March 2021.” The woman noted that her in-laws stood by her during the tribulations.

“When I lost my first pregnancy, some people came to persuade me to go somewhere with them but my husband was against it. He told me that it was not a problem for native doctors and the last one I had, I handled it properly,” she said.https://f38db69c6b7389df676c55adf6114c06.safeframe.googlesyndication.com/safeframe/1-0-38/html/container.html

Helen described the day she held her babies in her arms as a great moment. She said, “The day I opened my eyes and saw my triplets, I was overjoyed and started laughing but my husband shed tears of joy seeing the three girls. The first baby was named Nkemdilim meaning ‘this one is my own,’ the second baby bears Nkemakonam meaning ‘May I not lack what is mine’ while the third baby was christened Nkechukwudi meaning what God said.”

She told our correspondent that two of the triplets are identical with varying complexion while the third one has different features, allowing her to differentiate one from the other.

Asked if she would like to have another baby, the excited mother said, “No. I am okay with the triplets.”

Speaking with our correspondent, the father of three said they looked unto God during the period he described as “very difficult.’’

He said, “People recommended all sorts of things to us but I told them that there was no need because God would manifest at the right time. I kept trying to find out what the issue was but none of the doctors could really give us an answer to what was wrong.

“It got to a stage that I could no longer copulate with her. My wife had to go to our reverend.  I told him it wasn’t that I hated her. I was just worried with the stillbirths. We visited many hospitals to find out what the issue was but no one had an answer.”

The realtor added that it became more traumatising when the doctor confided in him that his wife could no longer carry a child as her womb was weak due to multiple evacuations.

He stated, “When she had ectopic pregnancy and the doctor told me that my wife could no longer give birth, I had to keep it to myself for a long time in order not to discourage her from trying.  Only God knows what happened because she was always getting pregnant only that to give birth was never successful.  I tried to be strong but I still lived in doubt but during the COVID-19, God did the miracle.”

Emmanuel said he got weary when his wife told him of the expected date of delivery of the triplets because of past episodes.

He said, “I was afraid when she called me that I should come to the theatre. While in the theatre and I heard the children cry, I was shocked. I couldn’t do anything than shed tears; I shed tears of joy. I finally heard the cries of children after many stillbirths. In the past, I was shown dead babies. But that day in the theatre, I saw the greatness of God. I thought it was a movie. I was excited that my wife gave birth to our children.

“I am really excited. I can’t even concentrate at work. I keep running home to see the babies every now and then.  My wife is a cloth designer; I had to let her do that because she needed something to keep her busy.’’

He added that his wife used to be moody whenever she saw families and their babies, noting that he devised ways to make her happy by taking her out to fun spots. 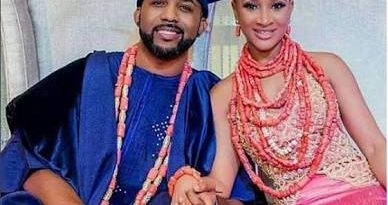 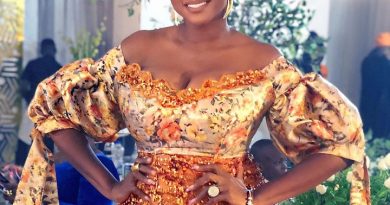 “I Got Pregnant In SS3 And My Church Banned Me From Singing In Choir, See My Grown Up Daughter”, Waje (pics)