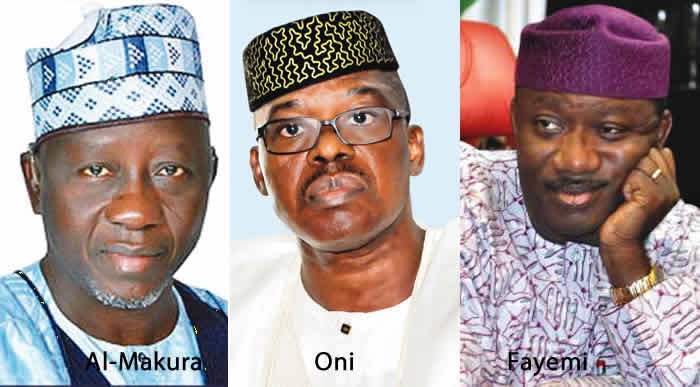 The rescheduled All Progressives Congress governorship primary in Ekiti State has been concluded but the ripples created by the exercise continue to reverberate in the polity.

A former governor of the state and Minister of Mines and Steel Development, Dr. Kayode Fayemi, won the primary, polling 941 votes against another former governor, Segun Oni, who got 481 votes among other 31 aspirants.

The fact that 33 aspirants took part in the primary made the task more challenging for the APC Election Committee led by the Nasarawa State Governor, Tanko Al-Makura.

The events of the May 5 exercise that led to the aborted primary rocked the party to its foundation. Aggrieved aspirants took on one another and also accused the National Chairman of the party, Chief John Odigie-Oyegun, of ensuring that the electoral process favoured Fayemi – the eventual winner of the poll.

But one of the allegations that led to the suspension of the first primary was that of financial inducement of delegates by a particular aspirant at the point of voting. Trouble started when agents of some of the aspirants complained that the electoral process was being manipulated.

This paved the way for some thugs to attack the ballot boxes and smashed them, emptying the ballot papers in the directions the wind pleased. The security agents, who were caught unawares, struggled hard to restore normalcy.

Agents of some strong contenders in the race fingered the security operatives of allegedly compromising the process in favour of Fayemi.

They alleged that an agent to Fayemi, Mr. Samuel Abejide, was compiling the serial numbers of ballot papers to identify the delegates that voted for his principal.

The agents further alleged that the essence of identifying Fayemi’s ‘potential voters’ was to enable the minister to pay the N400,000 balance to each of the delegates after the primary, the beneficiary delegates having received N100,000 each before the exercise.

Only delegates from four local governments had concluded voting when the crisis erupted.

Before the primary started, there was an allegation that one of the leading aspirants had camped delegates in his country home two days ahead of the exercise and brought them directly to the venue thereby denying other aspirants access to them.

The Director-General of Babafemi Ojudu Campaign Organisation, Chief Ranti Adebisi, in an interview with our correspondent, complained that the process was heavily compromised.

He said, “The guideline stipulated that each aspirant can only bring in four supporters, but Fayemi brought many. His agents, including the DSS (Department of State Services) were issuing cards to delegates to fill after they had voted for him so that they can return later and collect the complete amount he promised them.”

But Fayemi’s agent, Pa Samuel Abejide, denied the allegation when confronted by our correspondent. Rather, he described the accusation as a gang-up against the minister. He accused those peddling the rumour as enemies of the APC.

“There was a proviso that if you are a delegate, who can’t read and write, you can call any of the agents. When they saw that I was the one being called by the delegates, they started feeling the heat and they were determined to disrupt it,” Abejide stated.

However, Oni, who is a former Deputy National Chairman of the APC, confirmed that money actually influenced the voting pattern in the primary.

The former governor insisted that virtually all the aspirants were guilty of influencing delegates with money to gain their votes.

Another aspirant and former Commissioner for Budgeting under the Fayemi’s administration, Debo Ajayi, agreed that money also played a major role in determining the winner of the primary.

Ajayi stated, “Yes, money played a big role. There is a direct correlation between money spent and the number of votes that the aspirants got. People looked for a person they are familiar with notwithstanding the vision. Another is the federal might.

“I only gave delegates money to cover transportation and feeding. I didn’t give money to induce them, whereas, some aspirants gave out N200,000, N350,000, N400,000 to each of the delegates. There is no way I can come near that. I could not measure up to that.

“The delegates trust me and believe in what I have to offer but at the end of the day, money was important to them with the perception that a particular aspirant has the federal might behind him.”

Ajayi lamented that sincerity of purpose and integrity were not enough to sway votes as many of the delegates turned opportunists and abandoned party’s interest in electing the candidate.

Narrating how money grossly dominated the primary, Ajayi lamented that many of the delegates surrendered their freedom to the highest bidder and allowed themselves to be camped ahead of the primary.

Ajayi added, “You can only camp people when you have money; they won’t go with you if you don’t have the money to give. If you camp and give them money, you have some measure of control.

“The voting was not based on conscience at all; it was based on inducement. The delegates were hopping from one point to another to collect money. They were just jumping about. If you give money but failed to camp the delegates, you don’t have control. I’m not saying that camping is immoral; making delegates inaccessible to others and restricting their movement is an undue advantage.

“Some were camped in Ilaramokin, Owo and Akure in Ondo State ahead of the primary. These places are several kilometres away from Ekiti State.”

Ajayi could not rationalise spending huge amount of money on delegates to get their votes in the bid to serve the people.

“When you spend several millions on primary, you want to ask yourselves: what is really the motive? Is the reason to serve or be served? The delegates became rich overnight.”

He also believed that the influence of money on the primary did not give an opportunity for the best candidate to emerge.

“Unfortunately, at the end of the day we will have a situation whereby people who shouldn’t have emerged as candidates are ruling,” he said.

Oni, who corroborated the argument of Ajayi, faulted the adoption of delegates-primary strategy at choosing candidates, saying the system encouraged corruption and monetisation.

He suggested a direct primary where all members of a political party would have a say in who becomes their candidates.

He said, “But talking seriously, our party or any serious party should not touch the delegates-primary again even with a long pole. Delegates-primary has gone beyond mere imperfection, it has become horrendous and totally out of tune with normal thinking and expectations. And we hope our party will not tread this path again.

“If you ask all the aspirants, including the winner, I’m sure it is not a game they enjoyed. We should better ensure that a new agenda will be pursued whereby every member will have the opportunity to vote in the primary so that it will be more representative of the thinking of party members which ordinarily it supposed to be than when you have a handful of people who turned opportunists overnight and could not see any objective than maximising their returns.”

But Ajayi, while agreeing that the direct primary might be a better option, noted that both were susceptible to financial influence and had challenges.

He said, “To be frank, none is without challenges. Both are susceptible to money influence. In direct primary, the money will spread to more people while in delegates-primary, it is limited to the delegates and the delegates become rich overnight.

“I like the direct primary because it is more democratic but logistically, it is more difficult to operate.”

He said, “There is the need to educate voters that they lose more than they gain when they collect money to vote. There should also be strict adherence to election guidelines by political parties. They should obey their constitution and apply it to the letter.”

See How President Buhari Reacted To Defectors From APC

Why Army has not staged coup again in Nigeria — Obasanjo